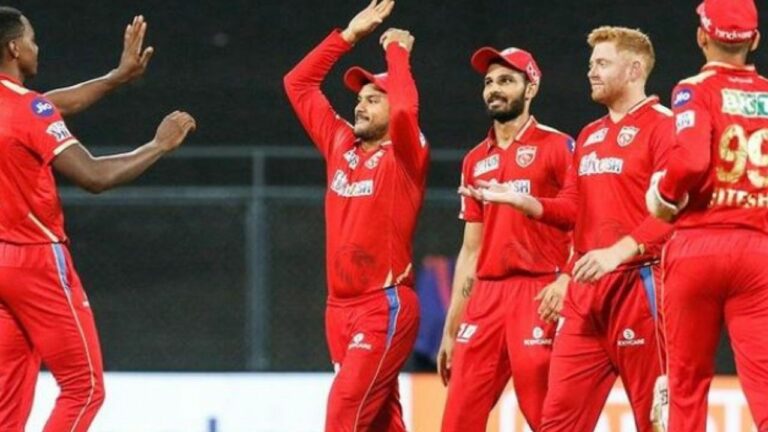 Liam Livingstone (49 not out off 22 balls) and Harpreet Brar (3/26) helped Punjab Kings beat Sunrisers Hyderabad by five wickets at the Wankhede Stadium here on Sunday. Hyderabad scored 157 runs in 20 overs for the loss of 8 wickets.

Harpreet Brar was adjudged ‘Man of the Match’ for his brilliant performance. Jonny Bairstow and Shikhar Dhawan opened the innings for Punjab Kings chasing the target of 158 runs.

At the same time, Bhuvneshwar Kumar bowled the first over of the team. Bairstow scored 12 runs in this over by hitting three fours.

Bairstow got the first life on the score of 20 runs. On the fifth ball of Washington Sundar’s first over, Bairstow tried to play a shot but the ball went into the air and Umran Malik dropped a simple catch there.

However, Bairstow was dismissed after scoring 23 runs in 15 balls. He was clean bowled by bowler Fazlhaq Farooqui on the last ball of his first over. After him Shahrukh Khan came to the crease.

Punjab Kings got the second blow in the seventh over. Shahrukh was dismissed after scoring 19 runs in 10 balls He was caught by Umran Malik at the hands of Washington Sundar.

After him Mayank Agarwal came to the crease and led the innings with Shikhar Dhawan.

Punjab Kings got the third blow in the eighth over. Washington Sundar got captain Mayank Agarwal caught by Jagdish Suchit.

After that Liam Livingstone came to the crease and opened his account with a six. After eight overs, Punjab’s score was 77 for three.

Umran Malik proved expensive in his second over. Although he gave only three runs in the first four balls, but in the last two balls, Livingstone hit two consecutive sixes.

Shikhar Dhawan was also dismissed after scoring 39 runs in 32 balls. He was bowled by Fazlhaq Farooqui on the third ball of his last over.

Livingstone took 23 runs in the 15th over. He hit two sixes and two fours in the over. Also scored 2 runs in one ball.

However, he missed out on scoring his half-century by 1 run as Mandak ended the match with a four.

During this both the batsmen remained unbeaten. Punjab defeated Sunrisers Hyderabad by five wickets in the last match.