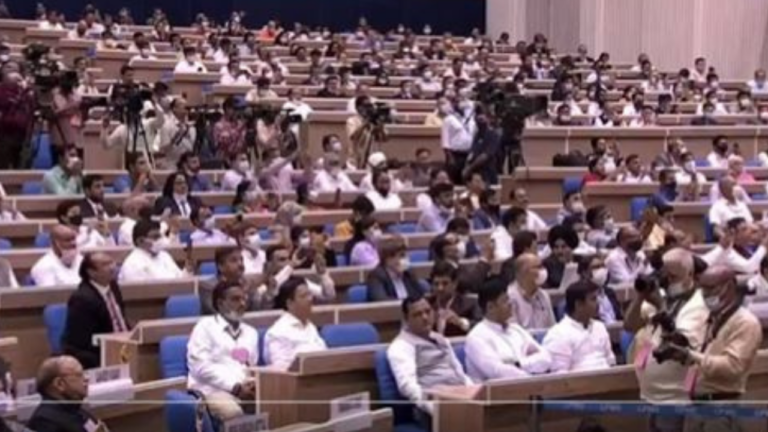 Prime Minister Narendra Modi on Thursday launched several initiatives to further accelerate and accelerate the performance of the MSME sector.

He said that MSME sector constitutes almost one third of India’s economy and the strength of this sector is strengthening the entire society, thereby benefiting the development to all.

Addressing the gathering, Modi said that the efforts of MSME India will be the key driver of self-reliant India. He said that whatever heights India will achieve in the 21st century will depend on the success of the MSME sector. He stressed that it is important to strengthen India’s MSME sector to increase India’s exports and take India’s products to new markets.

He said, “Our government is taking decisions and making new policies keeping in mind your potential and the immense potential of this sector.

The initiatives launched today and other measures taken by the government are related to the quality and promotion of MSMEs. “

PM Modi also transferred the assistance digitally to the beneficiaries of PMEGP for 2022-23.

The Prime Minister remarked that when we say MSMEs, it extends to Micro, Small and Medium Enterprises in technical parlance. But these micro, small and medium enterprises are a big pillar of India’s growth journey.

The Prime Minister said that in order to strengthen the MSME sector, in the last eight years, the government has increased the budget allocation for it by more than 650 percent. “For us, MSME means maximum support to Micro, Small and Medium Enterprises,” he said.

Noting that more than 11 crore people are associated with this sector, PM Modi said that MSMEs are important for employment generation.

During the pandemic, the government decided to save small enterprises and give them new strength. He said that under the Emergency Credit Line Guarantee Scheme, the Central Government has ensured Rs 3.5 lakh crore for MSMEs.

According to a report, this saved about 1.5 crore jobs. He said that MSME is a major medium to fulfill the promises of the nectar period of India’s independence.

Underlining that for the first time the business of Khadi and Village Industries has crossed one lakh crore rupees, he said that this has been possible because the small entrepreneurs and our sisters in the villages have worked very hard. The sale of Khadi has increased 4 times in the last 8 years.

Entrepreneur India reflects the continuous commitment of the Government from day one to work towards the empowerment of MSMEs. Union Ministers Narayan Rane and Bhanu Pratap Singh Verma, MSME stakeholders from across the country and diplomats from various countries were present on the occasion.